This new vegan lifestyle I've embarked on has taught me a lot about myself and how much I'd been missing in life. I have discovered an amazing amount of good wholesome natural plant-based foods that I'd never encountered before in life because in my predominantly meat-eating household the veggies and grains were almost always a side dish, never a main event and pretty much the same old thing each day. I am not a fan of eating the same thing over and over again--it gets old quick and I love to spice it up so when I found punchfork.com with the help of my friend Nicole I was ecstatic and it has basically become my new online vegan cookbook.

This morning I was pumped because of all the goodies I tried for the first time ever! Take a look:


I took a picture of my tasty breakfast this morning which was just scrumptious!


What do you think? Dinner was also really yummy! We had another dish from the Vegetarian Times' issue from April/May 2012 called Conchiglie with Tomato, Pine Nuts and Raisins. I am in love with that magazine!

Posted by Nadia Marie at 7:58 PM No comments:

It's been a pretty long while since I last wrote anything about food and at long last I have some news to share with you all. First, I have made some lifestyle changes since I had gall bladder surgery in February and though to some they may seem drastic to me they are the best changes I've ever made. My food journey has taken me from eating a diet full of animal products to embarking on a new vegan lifestyle. It is a journey I do not expect everyone to understand but it has helped me lead a healthier life and I'd like to share what I am learning and the recipes I discover along the way.

Last month I bought a copy of Vegetarian Times magazine and found this amazing recipe for Soba Noodles with Eggplant and Mango which has become a hit here at the house. I had found a pack of noodles at Big Lots and decided to make it and give it a whirl. It is such a great dish!

I made it last night for dinner and took some to work as well! Yum! Here are a few photos of the preparation and the dish:

What delicious trails are you blazing these days?
Posted by Nadia Marie at 8:59 PM No comments:

It is officially 2012 as of three minutes ago here on the East Coast! May it be a prosperous one for all!
Posted by Nadia Marie at 9:03 PM No comments: 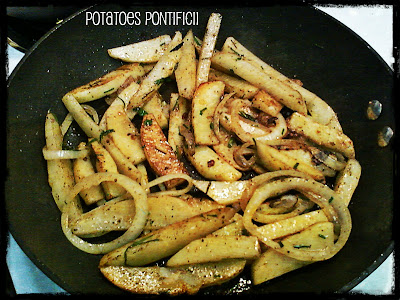 Lunch time at home is always an interesting affair. Today my Dad made his own variation on french fries and when I asked him what they were called he said "papas pontifices" which is a play on the word for potato in Spanish which is papa, and just happens to be the same word for pope and since the pope is the supreme religious authority for the catholic church and these potatoes happen to be quite supreme, thus the name Potatoes Pontificii.

They are quite quick and easy to make too! Peel a couple of potatoes, cut them into small size wedges, fry them in olive oil and season them to taste with salt, pepper, chili powder, tarragon and chives. Add some sliced onion and top with Parmesan cheese for a more refined taste. Season them any way you like them! They are tasty and quick! 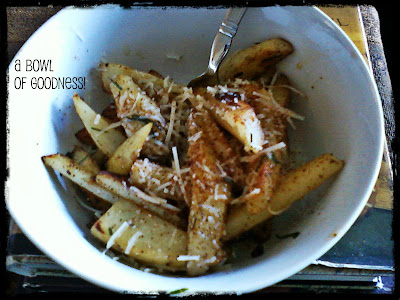 Time in the kitchen... 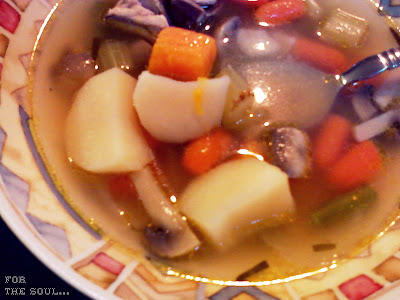 Spending time in the kitchen is something I'd been missing out on a bit lately. Yesterday I spent the afternoon there, making some good soup, brewing tea, making baked apples and Russian tea cakes. Since my own computer is down at present I have had more limited time to sit at the computer and write but took this opportunity to do so this morning before I have to think of anything else to share what I made yesterday with you. Soup is a soul warmer, there is nothing more soothing than a cup or bowl of good homemade soup.

Here are a few snapshots of what my afternoon/evening in the kitchen looked like:

...
...  How's that for time well spent in the kitchen? The soup was delicious, especially when accompanied by some toasted Jewish Rye bread. Fancy a bowl?

Posted by Nadia Marie at 6:41 AM No comments:

Fill my kitchen with these...

I love perusing the curated lists on Etsy for ideas and shops to add to my favorites and today I want to share with you just a few things that I would love to have in my pantry and kitchen. Here are my favorites:

I hope you've enjoyed this list!
Posted by Nadia Marie at 5:06 PM No comments:


Autumn is my favorite time of year and with it come a plethora of good wholesome dishes that arise from the bounty of the harvest. Tonight I am making a delicious stew and the past few days I've made lots of pumpkin goodies which I am eager to share with you. Today though, I wish only to share some thoughts and photos of autumns past. Soups, stews, hardy breads come to mind when thinking of autumn. Pumpkin pies, apple pies, baked squashes, rain and falling leaves are in the air.

I long to get a whiff of an apple pie baking or of cider on the stove. It's my favorite time of year and I am in an area which has a different kind of autumn and winter, not at all like the northern ones I am used to. Still, at home I bake and it fills the house with that sort of autumn scent and brings back memories because when all is said and done it is the memories that live on in our hearts and minds. We are constantly creating memories and now with these Internet tools we can preserve them in perpetuity in a way our ancestors never dreamed of before.

Aren't those colors beautiful? They remind me of days gone by. This year has been a challenge for me. I went from having a good job to having none and being back home with my parents but it has also been a year where I could exercise my creativity more and my culinary activity as well. So, here's to autumn goodness and to surviving the end of this tumultuous 2011 and entering 2012 with renewed strength and determination.

Posted by Nadia Marie at 3:18 PM No comments: 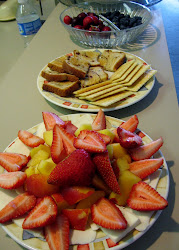 NOT FOOD BUT GREAT